Most of you that have read this blog have heard me talk of my oldest daughter Fred.
If not you can read about her here and here .
Fred is 7 months pregnant with her first child. She has a daughter Gracie that is her husband's by another marriage. Fred has been on her Face book and commenting on her inability to sit at work because her baby kicks so much. She is due a little boy that she will call Hank. The doctor has told her that Hank is overly large for his age.   It is everything I can do as her mother not to laugh myself silly. There is justice for mothers in this world.
You see Fred was baby number 4 for me. Fred was huge.  The Canned Quilter was the size of a small foreign country. I had to be hospitalized twice because I threw up so much I dehydrated. I had to take shots for nausea. I all of a sudden became lactose intolerant, I developed gestational diabetes. Everything that could go wrong with a pregnancy I think I had.

I went into labor with Fred on a Sunday morning. Fred's father ( my first husband who we shall refer to in future as The Dummy) had already been through 3 sons being born with me. So in typical Dummy fashion he decided on the way to the hospital that he needed to stop and pick up a Sunday Paper to read. Then....he decided that he needed to get a biscuit in the drive through. Now all this time I am in hard labor! We get to the hospital and Fred was coming. I barely make it out of the elevator. No shave job, no enema, no nothing, including no doctor. They pull Joe the podiatrist from Jersey out of the Hallway just in time to catch Fred while Dummy looks on with his Sunday biscuits and newspaper still in his hand and a silly expression. The first words Joe the podiatrist said to me is ....


"Congratulations it's a girl and how do you pronounce your name ! "
Well people Fred weighed 9 pounds 5 ounces and was 22 inches long. She was born without so much as an aspirin. I had went through the majority of my labor, short lived though it was, in the McDonald's drive through. Need I say more.
Fred has indeed been a blessing. I had grown up with 4 brothers and had a husband and 3 sons. I had waited a long time for my girl. However from a very young age Fred has had a foot fetish! Even as a small child Fred would sneak away in the store and you would always find her in the shoe dept clomping around in size 10 fire engine red spike heels . We have always blamed this on Joe the Podiatrist.
Fred got married in September of last year. She made a beautiful bride! All dressed in white and her grandmothers pearls. 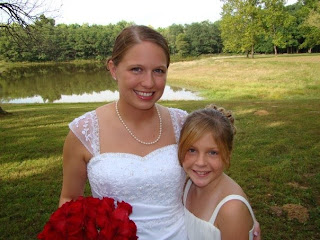 And this Joe was just for You! 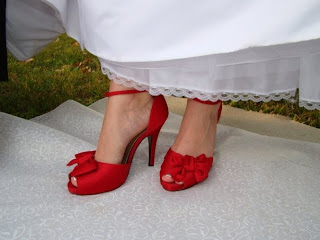 Blessings from The Holler
The Canned Quilter
Posted by the canned quilter at 10:13 AM
Email ThisBlogThis!Share to TwitterShare to FacebookShare to Pinterest
Labels: Kids