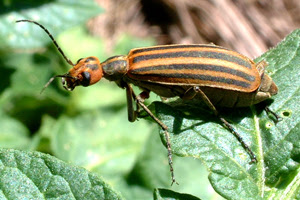 We woke up Tuesday and went out to make our usual rounds of animal pens and gardens. In the new garden we noticed something scurrying across the ground and noticed all the leaves were gone from about 20 of the potato plants in the new garden. On closer inspection the above beetle is what we found. Known as an army beetle or striped blister beetle. These things were moving across my garden like a small army eating everything in their path. There were maybe a thousand of them. I have never seen anything like it in all my years of gardening. I mean it was literally like the biblical plague of locusts!! 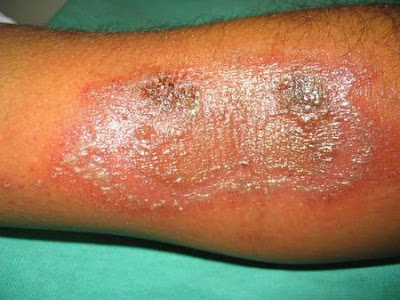 The bad thing about blister beetles is that they have this effect on humans above and below are pictures I found of blister beetle reactions. They do not even have to bite as crushing them causes a reaction. 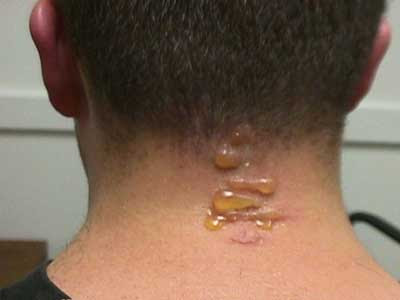 Blister beetles are also harmful and even can be deadly to some livestock. (especially horses) Usually found in alfalfa fields and we buy alfalfa hay for our rabbits and get goat barn litter for our compost that has alfalfa hay in it. So I would say one or the other was infected.

Usually I try to keep my pest control to organic methods but I knew that with record heat and drying winds that if they stripped this garden it would more than likely never survive. So with such odds and such a bad infestation we decided to spray with Liquid Sevin Dust. The good news is that being such a young garden it will be quite a while before we harvest anything from this garden thus reducing our exposure to the chemicals but it still breaks my heart that after years of not using this method to go back to it.

I am hoping that one spraying will be sufficient but just in case I am going to mix up some of my garlic bug spray to keep on hand. 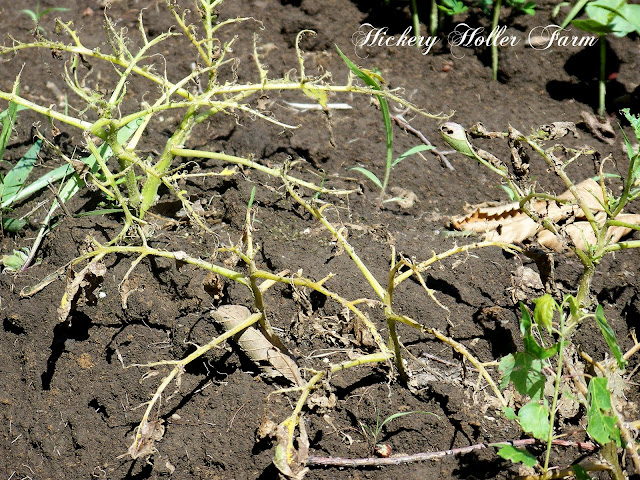 Unfortunately this is how part of my potato row looks now. Pretty nasty bugs they were.  They were quick too as this was all done in one morning.

Anyone else out there having problems with bugs this year?