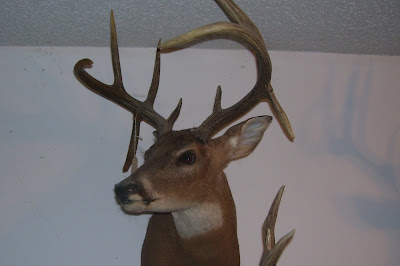 As many of you who have followed this blog for any length of time know O Wise One is a hunter. He grew up running these river bottom lands of the Grand River. His great grandfather was a river boat captain on the Missouri River before moving here. He then ran a sawmill and raised a family. 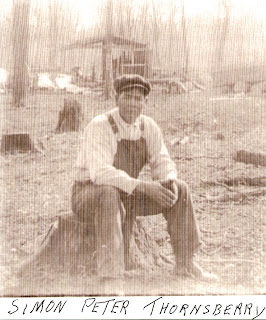 His mother was born right on Locust Creek. No one lives on Locust Creek now because it floods out. She told stories of her father going out and killing hundreds of ducks at a time. The ducks were brought home and picked and cleaned. The feathers saved for mattresses and an individual duck put in a quart jar. They were then processed in a hot water bath and capped with fat. That is how they were preserved. Her father raised a family off the game that was killed during the depression. Extra money was earned for the family from the hides that were trapped. They got a new coat every year and shoes for the winter from the walnuts and pecans that were picked up and sold.  So as you see the cooking and eating of wild game is a regular occurrence here on the farm. Wild game supplements the pork, chicken, rabbit and turkey that we produce for ourselves. We do occasionally buy beef.  We also eat lots of local fish caught out of our own ponds or out of the rivers and farm ponds in the area. 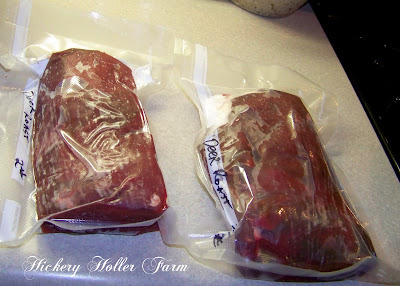 We prepare venison pretty well the same as beef. O Wise One always kills young does or a button buck as table meat. Very rarely does he horn hunt anymore. We have found that we get about 30 pounds of pure trimmed meat from an average deer. He skins and cuts up our deer right here on the farm. I like that he is more careful with our deer than anyone I have ever seen. He soaks the meat out for several days before doing anything with it. It is completely trimmed of any fat and hair free when he gets finished with it. Then it is vacuum sealed and frozen so no freezer burn.  On average each year we process about 3 deer which gives us about 100 pounds of grass fed, fat free, pure meat. There are always roasts for pulled venison or pot roast. We mix the ground venison with ground beef at a half and half ratio for chili, burgers, meatballs, meatloaf and tacos. We make smoked sausage, andouille,  and Italian sausage mixing it with a little pork. If not the sausage will be dry without that extra fat. We also make jerky. Thought I would let everyone follow along making jerky. 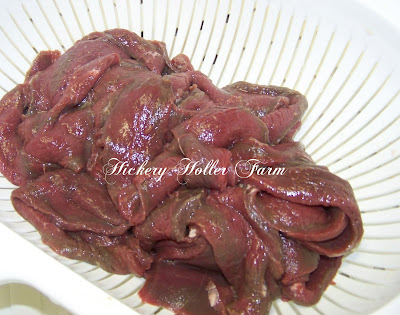 First freeze your meat until it is firm but not frozen. Partially frozen meat slices easier. We cut ours about a 1/4" thick. 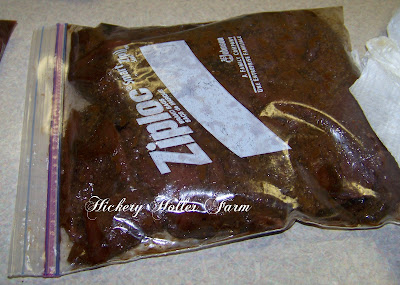 Then the meat is put into quart ziploc bags and the marinade recipe below added. Then the bags are placed in a large bowl just in case one leaks and put in the fridge. At least several times during the marinading process we take the bags and redistribute the meat and marinade so that it all marinades completely. We always let ours marinade overnight. 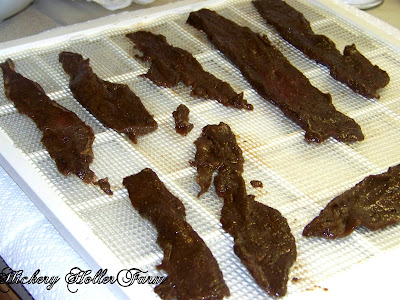 Then the meat slices are taken out and laid on the trays of the dehydrator. Set the temperature to the jerky setting of your dehydrator. On mine the setting is 145 degrees but each brand of dehydrator can be different. 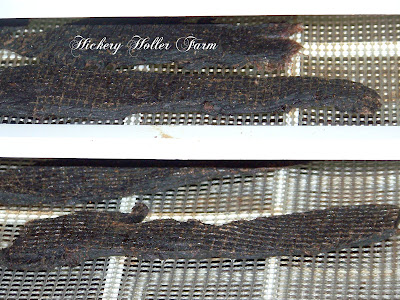 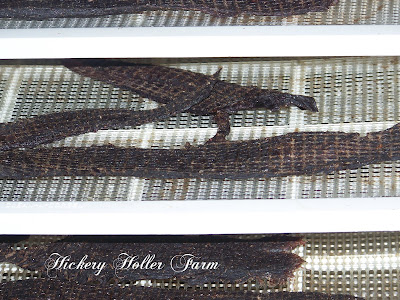 The meat is then dehydrated until it is completely dry.Ours dehydrated for 7 hours until dry and brittle. 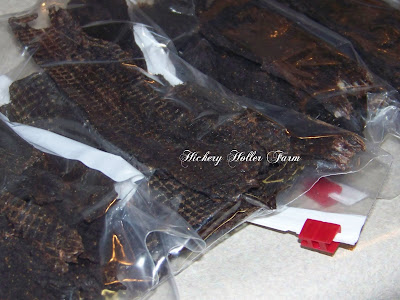 Once the jerky is done then we let it cool and put about 6 pieces or so in small ziploc bags. Then the small bags are put in a gallon bag and put in the freezer. If we are going to be keeping it long term then we vacuum pack it. We take a bag out of the freezer as needed and put in the refrigerator to defrost. This jerky won't last long with all the kids around for the Holidays.


Link To Return To Homestead Revival
Posted by the canned quilter at 10:45 AM

Email ThisBlogThis!Share to TwitterShare to FacebookShare to Pinterest
Labels: Canning, Hunting and Outdoors