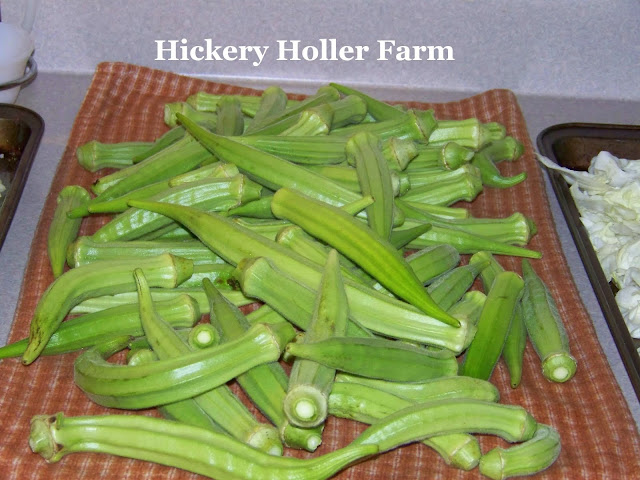 When the mercury climbs in the summer time we usually know the okra won't be far behind. And this year the heat has been late coming but the okra is really delivering right now.  Although the okra pictured above looks large it is still good because it is the variety Cajun Cowhorn and it stays tender even though it is larger unlike many okras.

Very few of my neighbors grow okra and even fewer eat it unless it is fried in cornmeal. For us okra is a regular vegetable enjoyed often in our meal rotations.

I bring the okra inside after cutting it in the cool mornings and put it in the sink and run cold water over it to cool it off. Then I wash it well with a clean cloth and water to remove any dirt etc. Then I lay it out in my cool kitchen to dry on an absorbent kitchen towel. You want to make sure  the okra pods are good and dry before cutting into them with a dry knife. If you don't and your okra comes into contact with water then you get slime! That is just the nature of okra. 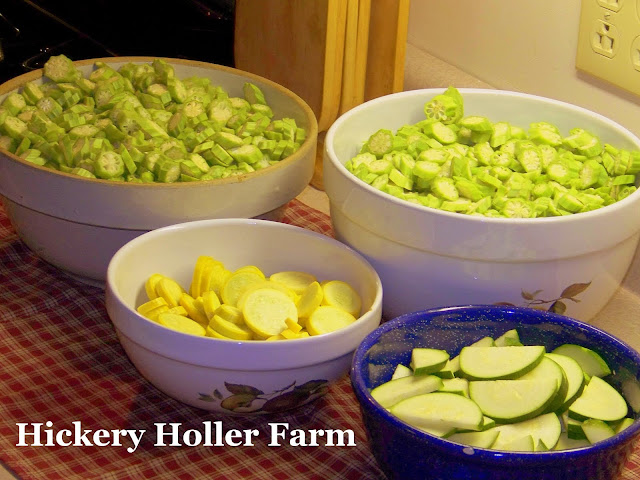 Once my okra is good and dry then I take a dry knife and slice it. Sometimes I slice it on my mandolin slicer if I have lots to slice just to make the job faster. If you cut into a pod and it seems hard then do yourself a favor and pitch it. Once okra gets woody it is not much good for anything other than maybe chicken or pig food. 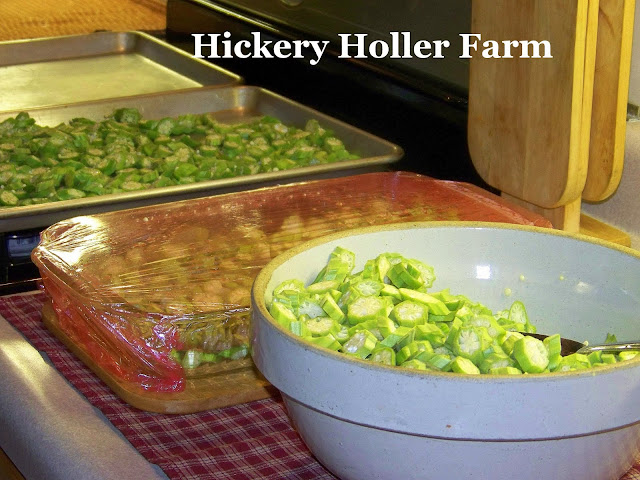 Next step I take my sliced okra and place it in 9 X 13 glass baking dishes, cover it with plastic wrap and run it through my microwave for 3 minutes. Then I consider it blanched. Okra is one of the few vegetables I dry blanch like this because when you do it this way it does not slime. If you drop sliced okra in a pot of boiling water then you get the biggest bunch of slimy goo you have ever seen. 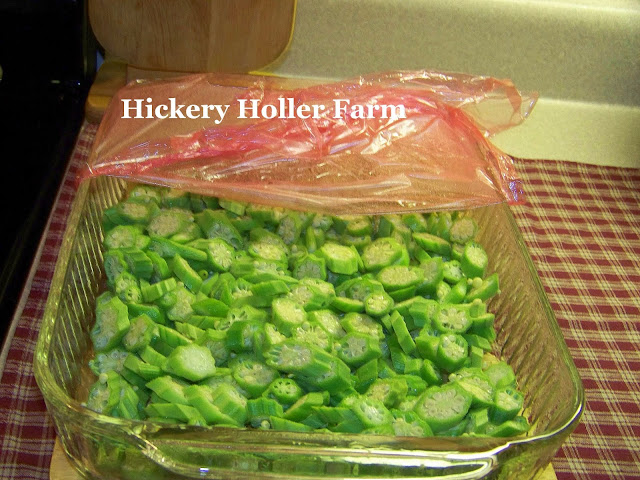 When I do it this way it comes out nice and cooked and ready to freeze, bread or dehydrate. 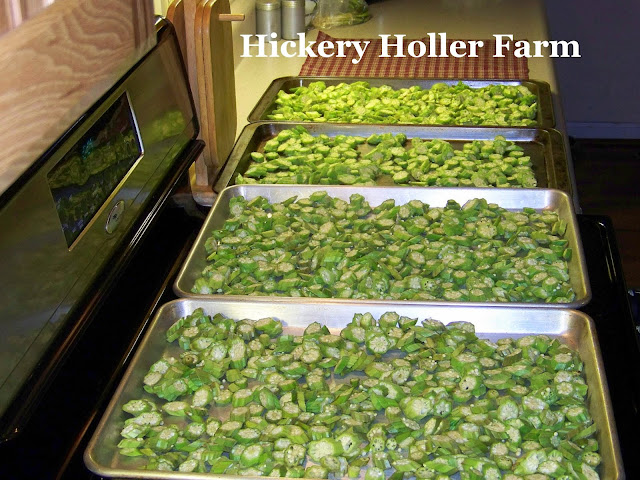 If you just want to freeze sliced okra then simply take your blanched okra slices and lay them out on trays and freeze them. Then they are ready to bag. 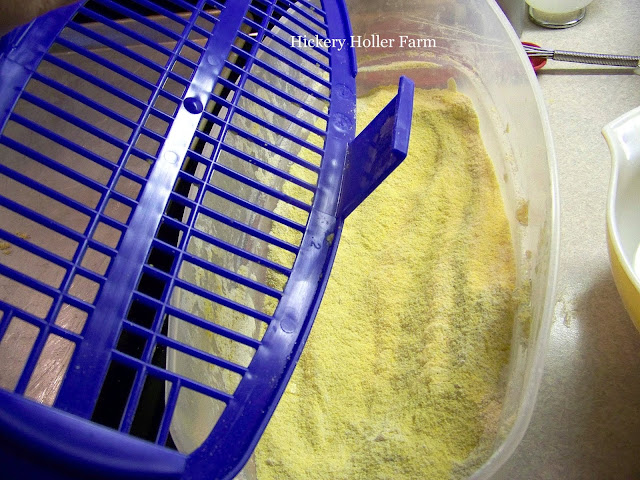 If I want to bread them I love this new way of taking the blanched okra, and dipping it in milk and egg, then in a mixture of cornbread and flour and then placing it on a tray that I have wiped with a little coconut oil. 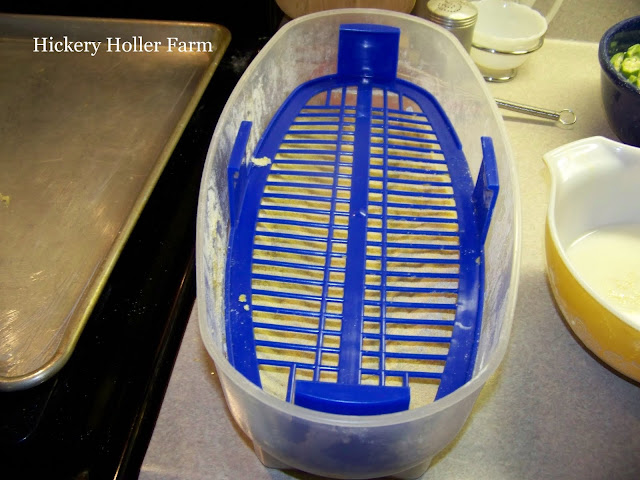 I use a mixture of about 2 cups corn meal to a cup of flour. I actually prefer using corn flour to corn meal when I have it. 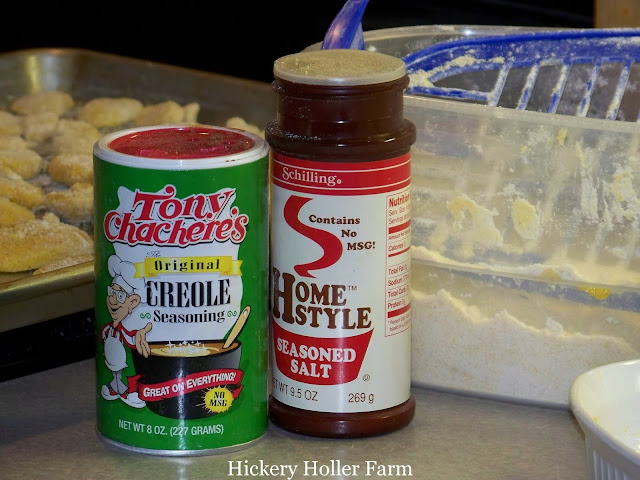 You can season the cornmeal with your seasonings of choice according to you own family and their tastes. 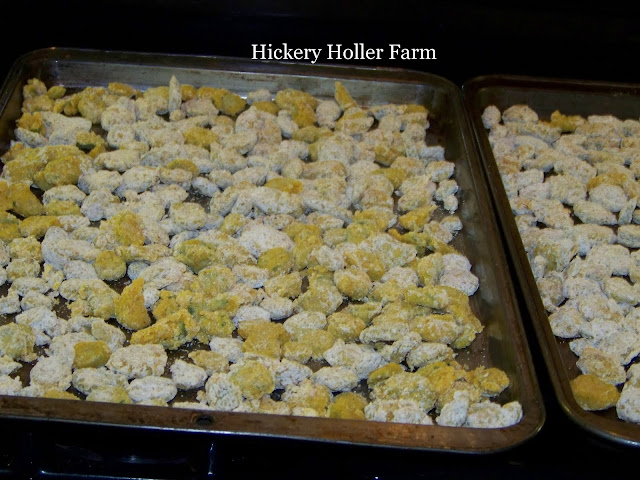 Then I have started taking that breaded okra and placing it on a tray and baking it according to a reader for 20 minutes at 350 degrees. This partially cooks the okra and helps to harden the breading so that it is much less likely to come off in the freezing process. I have also found that when you take it out of the freezer and cook it in the oven or fried that it does not take as long to cook.

Once your okra has baked for 20 minutes take the trays out of the oven and allow them to cool completely then place them in the freezer and allow to freeze. 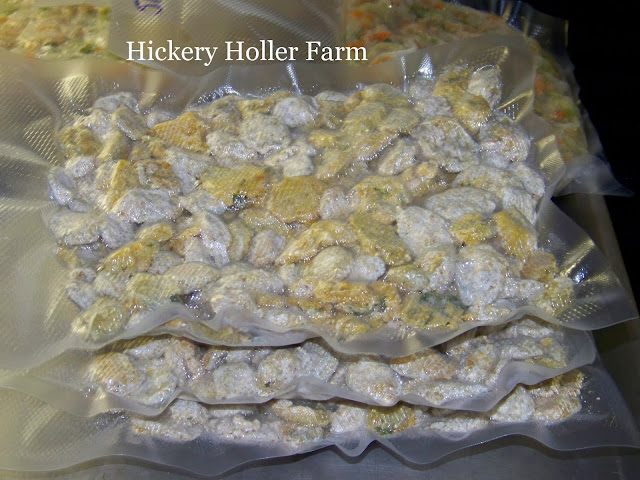 Once my breaded okra is frozen then we place it in vacuum bags and freeze. 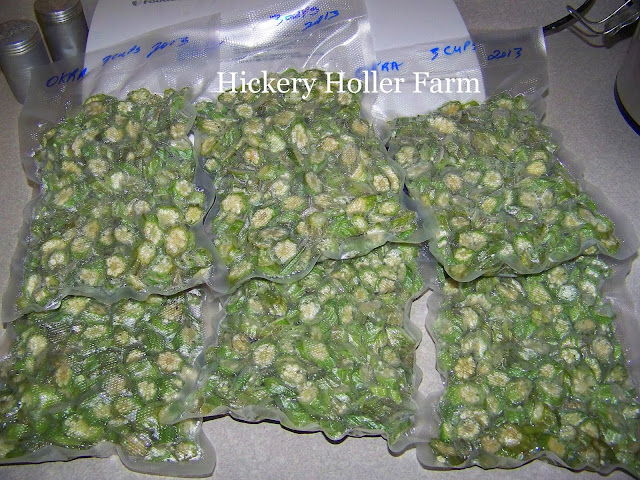 Sliced okra is bagged as soon as it is frozen also in vacuum bags then labeled and added back to the freezer. 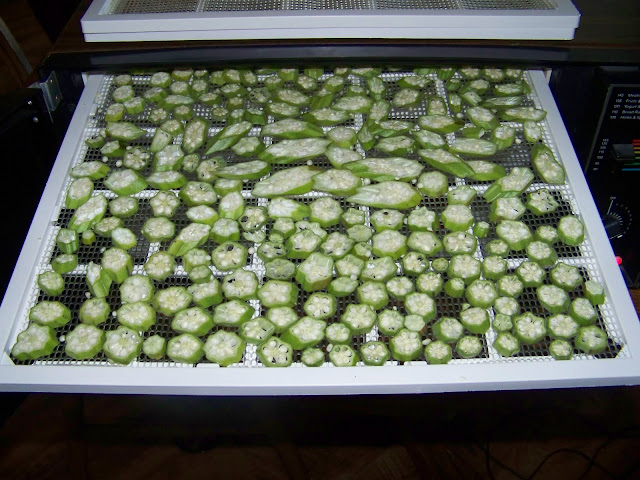 The third way you can preserve it is to place it on dehydrator trays as soon as it is blanched and dehydrate until crisp.

Now in the Ball Blue Book they do not tell you to blanch the okra before dehydrating but I find I have less problems with it when I do. 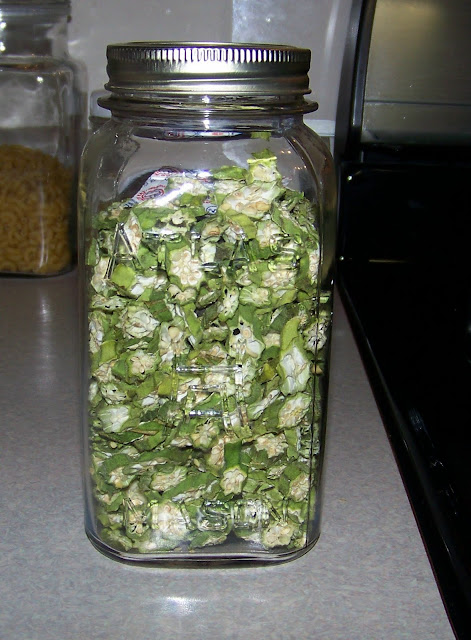 Once crisp allow to cool and place in bags or jars and seal with oxygen absorbers or a vacuum attachment.  I like this for soups but they say you can rehydrate and bread and fry it like this but I have never tried it.

Hope this helps some of you with that okra crop.

Posted by the canned quilter at 2:00 AM
Email ThisBlogThis!Share to TwitterShare to FacebookShare to Pinterest
Labels: Canning, Dehydrating, Freezing