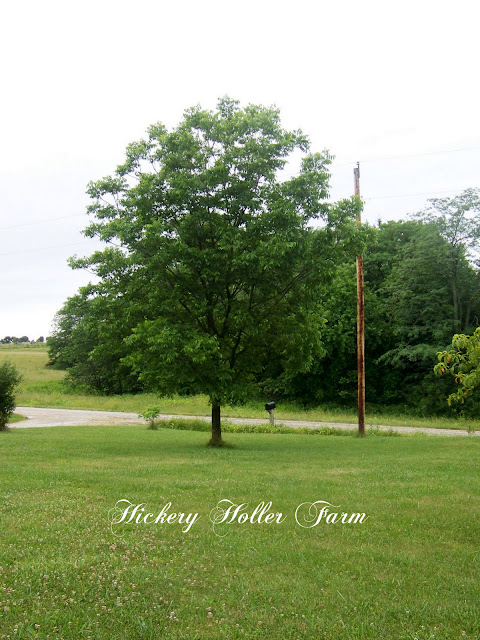 O Wise One loves trees. As soon as we bought this farm he started planting trees. He even went and learned how to graft trees. This pecan tree above was his first attempt at grafting.  It is now producing pecans after almost a decade. He is so proud of those pecan harvests. Another skill mastered. 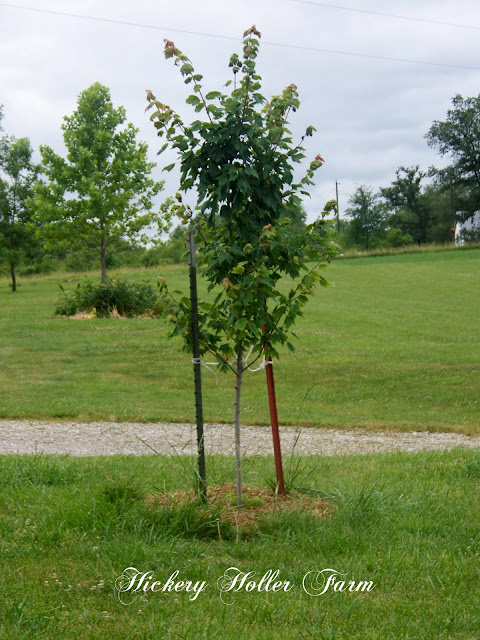 This maple tree was planted last year. It was a gift from my daughter Fred. 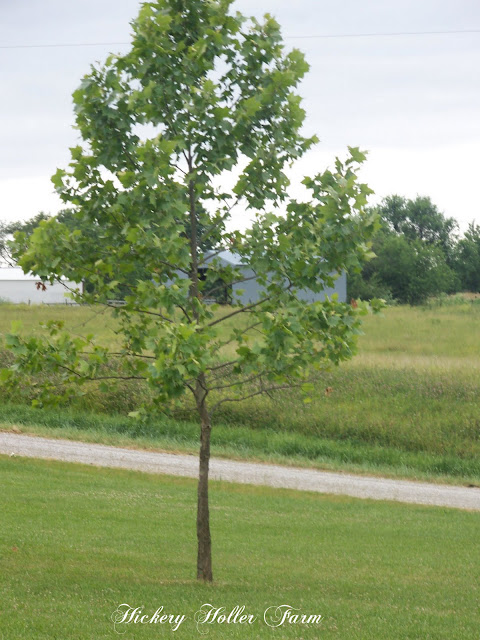 These sycamore were planted 4 years ago. They were given to O Wise One by his older brother who died just shortly after they were planted. They are now a reminder of a lost family member. 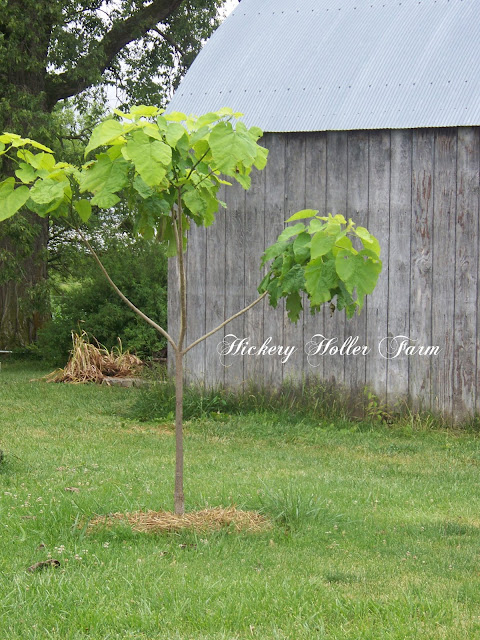 And these Catalpa trees planted just 2 years ago. After losing several trees in the last several years to wind we have started planting young trees that are known to be able to stand up to windier conditions such as the Catalpa tree above. Eventually once these trees are large enough to shade our intentions are to take out some of the softer fast growing maple trees that are getting really broken up from the strong winds that seem to be becoming much more common place.  Back home in Louisiana these were planted for the worms that feed off them. Actually a type of sphinx moth larvae I think. They were prized for catfish bait. Up north here I don't see the worms as much. 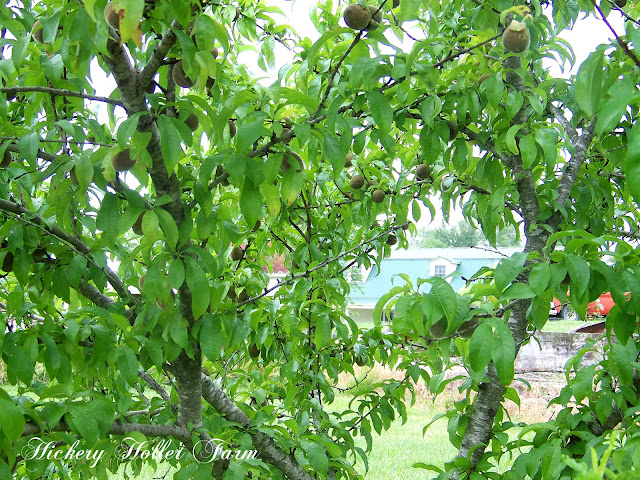 Not to mention the peach and fruit trees we have planted. 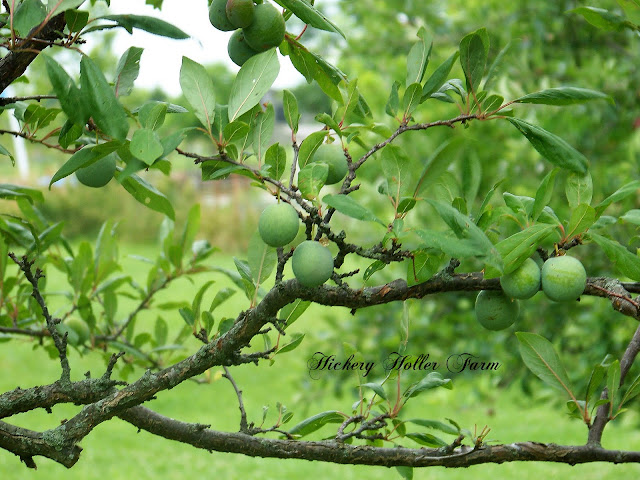 We now have in the yard sycamore, pecan, walnut, chestnut, oak, locust, mulberry, elm, black cherry, hackberry, birch, willow, maple, catalpa, red bud, crab apple, apple, peach, plum, cottonwood and american persimmon. There were very few trees around the house when we bought the farm and unfortunately most are still very young. What few older ones that were here were in bad shape and are no longer here due to wind damage. 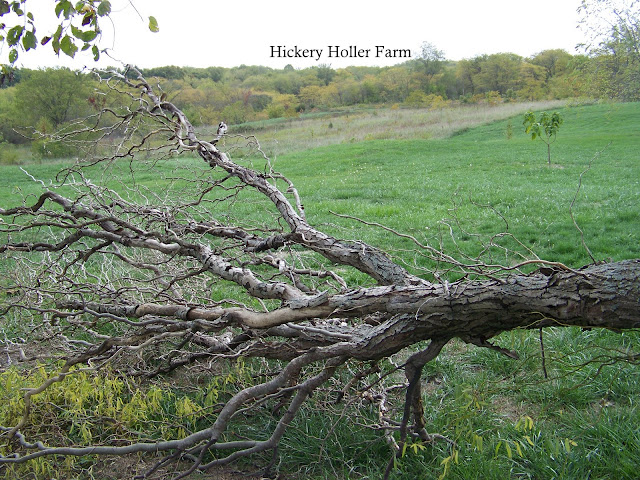 We are not always successful in our tree endeavors. This curly willow I rooted in Louisiana over 15 years ago from a limb cutting that O Wise One brought home one day. It made it's trip to Missouri in a black pot in the front of the U Haul truck. The terrible cold and snow storms of 2 winters ago really took their toll on this tree and just a couple weeks ago we lost it in a windstorm. 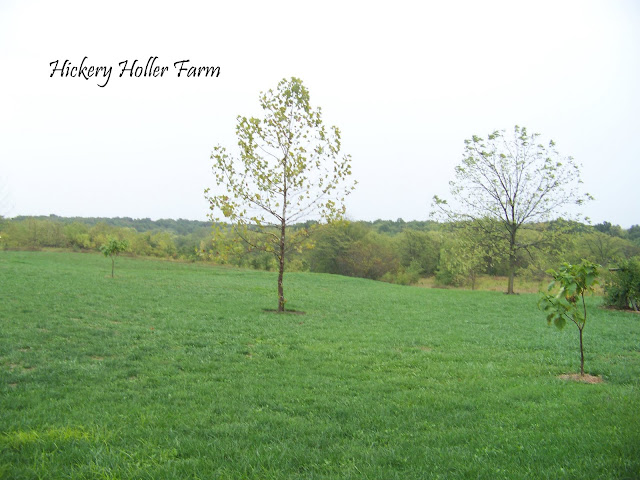 But as you can see in this picture there are plenty to take it's place. All in various stages of growth. The prairie is a harsh environment for trees.  With it's winter snow loads, ice storms and spring and summer tornadic winds.

My next trees to plant are sugar maples because I think I would like to try my hand at syrup.

Someday this will be a beautifully shaded place indeed.

We hope to live long enough to see it.

It is a wise man who plants a tree in the shade of which he knows he will never sit...Old Greek Proverb

Have you planted a tree lately?


Blessings from The Holler

The Canned Quilter
Posted by the canned quilter at 4:00 AM
Email ThisBlogThis!Share to TwitterShare to FacebookShare to Pinterest
Labels: Country Life