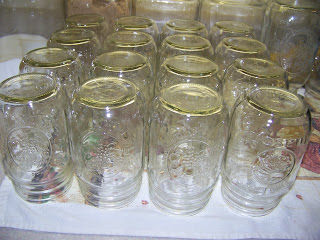 Yes I am still canning !!

Tomatoes have been a challenge this year. Cool weather caused a low percentage of blossom set. Lots of blooms and very little fruit. As the season progressed more blooms set but then too much rainfall caused the ripening tomatoes to split.

Solution: I picked the tomatoes early trying to get them before large rains and let them finish ripening on the shelves of my seed starting rack in the laundry room. Once the tomatoes were ripe there was never enough at one time to make a complete batch. So instead of cooking all these little batches of tomatoes. I froze the ripe tomatoes on cookie sheets and then put them in large plastic bags and stored the bags in the freezer waiting on the fruit to accumalate.  Normally I can wheelbarrow loads of tomatoes at one time but that was not to be this year. Last weekend I decided to complete this job so that I could free up that freezer space for other stuff. So I took the tomatoes out of the freezer and put them in the sink and ran hot water over them. The peels slipped right off!
I had heard of doing this but never tried it. 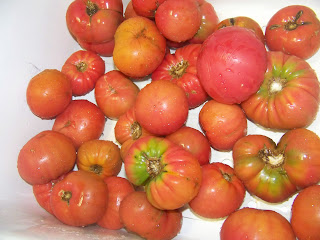 Then the tomatoes were put into my large cooker and simmered for about an hour. 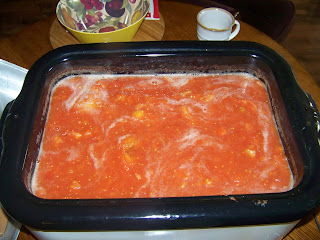 Then I ran them through the ricer! 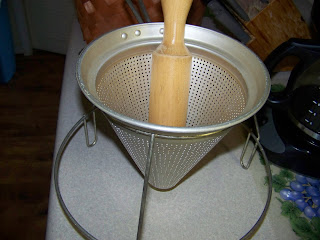 This removed the seeds, peels and core leaving me clean tomato puree to cook down for tomato sauce. All the seeds and peelings went to the chickens who absolutely feasted. The sauce went back into the cooker and I allowed it to cook all night Sunday night on low reducing the tomato sauce down to almost half. I read somewhere the other day where they said not to use these old aluminum tools that they can contaminate your food with heavy metals. Has anybody else heard of this problem? I have used this ricer for years as it was O Wise One's mothers and am wondering if I should be concerned!  The last woman that used this lived to be in her 90's........

Monday I had to go get more jars. I have not bought new jars in years and was suprised at how much the price had gone up. 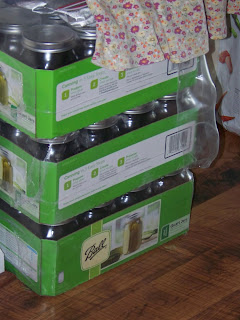 Once the jars were washed they were put into the hot water and sterilized and filled with hot tomato sauce. I added 1 tsp of lemon juice and 1/4 tsp salt to each jar. Hot lids and rings were put on and they were hot water bathed for 30 minutes. 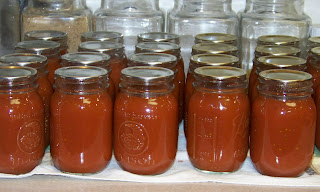 So that is the end of the tomato canning this year and I did it a different way than the traditional way that I usually can tomato sauce. I guess canning is like everything else in that you have to be flexible and open to new ways of doing it. The sauce turned out great with no change in the flavor or texture that I could tell. I now have fresh tomato sauce for those spaghetti sauces, chilli pots and pizza sauce recipes.

Another job done and many more to go.


Blessings from The Holler

The Canned Quilter
Posted by the canned quilter at 5:54 AM
Email ThisBlogThis!Share to TwitterShare to FacebookShare to Pinterest
Labels: Canning