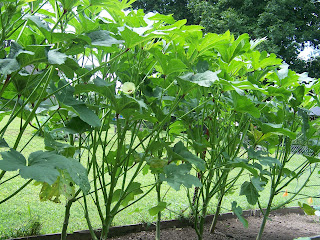 Another overachiever in my garden this year has been the okra. I tried a new variety to me called Heavy Hitter from seeds I purchased 2 years ago from the farmer in Alabama that developed this okra. In the past I have traditionally grown Cajun Cowhorn variety and also Clemson Spineless.  Cajun Cowhorn is an heirloom variety that my parents grew in Louisiana when I was a child and the great thing about that variety is that the pods stay soft and edible even when very large. Heavy Hitter is a variety developed by a farmer over many years by selecting the best producing Clemson Spineless plants in his garden and saving seeds from those specific plants. It is known to be an extremely heavy producer and has lived up to it's name. I see it is available now at Bakers Creek Seeds if anyone is interested in trying it. I will say that it has produced spectacularly for me. We did have an extremely cool spring and it was slow to get started but once started it will produce now till frost. I found the seeds just a tad expensive at first but now save my own so have plenty for years to come. I also maintain a supply of Cajun Cowhorn seeds as well. 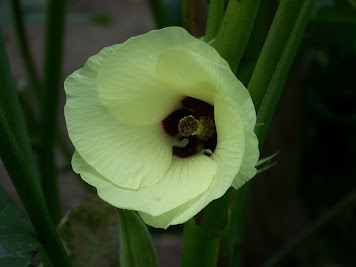 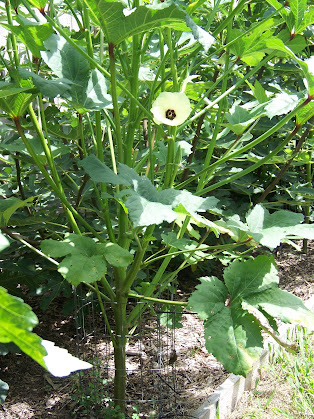 Like any other okra Heavy Hitter makes a beautiful yellow Hibiscus type flower and a large bush. My okra in the garden and around the place tucked here and there are between 8 to 12 feet and some are 4 foot wide so give them plenty of room to grow. They also like rich soil and produce well in heat and even dry conditions to a point. I like to cut my okra pods  from 3 to 5 inches in length so that they are good and tender. 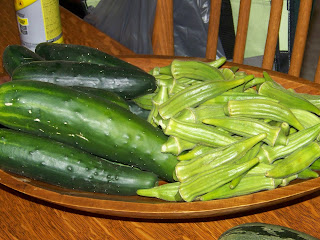 Right now I am averaging about a gallon of okra a day. I have frozen about 40 vacuum bags with 4 cups each now in the freezer. This we love just tossed with olive oil and sea salt and roasting in the oven.  I have also canned okra and tomatoes in jars for making a dish that starts with a traditional roux with shrimp and onions served over rice. It is just okra, tomatoes and onions in the jars. I also use this in soups as well and sometimes gumbos. I have also frozen okra breaded for frying. 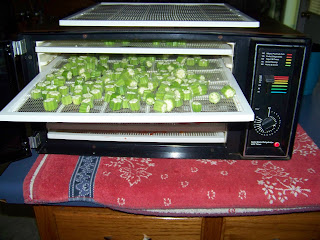 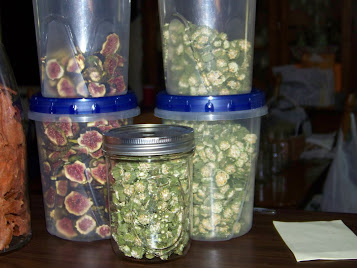 So for now we are dehydrating okra. My husband eats it straight out of the container as a snack because it takes on somewhat of a nutty flavor. Dehydrated okra will eventually once I am finished go into Mylar bags with an oxygen absorber and be stored in food grade buckets with gamma lids. This way it should keep for years as long as it is dried completely crunchy. Rehydrated okra can be used roasted, in soups or even breaded and fried. It all works and no slime! 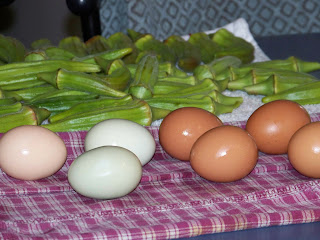 There is also a pickled okra recipe under canning recipes above if you want to give that a try.
Blessings from The Holler
The Canned Quilter

Posted by the canned quilter at 4:02 PM
Email ThisBlogThis!Share to TwitterShare to FacebookShare to Pinterest
Labels: Dehydrating, Freezing, Vegetable Gardening