Our snow melted here yesterday but woke up to a cold 28 degree morning and another 1.5 inches of fresh snow and a little ice. This winter has been a snowy one for us.

I received an email recently from a young cook asking questions about how to use her canned, dried and frozen food preserves. So I decided I wanted to do a couple posts about cooking with home preserved foods. People ask me all the time what do I preserve. The answer is what grows well in my area, what preserves the easiest and best and what I have developed recipes for over the years that I know my family will eat. These are not fancy recipes but rather just old fashioned stick to your ribs cooking on a budget.

In a time of rising  food prices and increasing shortages it seemed an appropriate subject to cover. I started to name the next couple of posts recipes cooking by the seat of your pants. Maybe guerilla cooking!

Anyway I thought I would post recipes for a bit showing how I use my preserved foods from my gardens and how I keep a stocked pantry and freezer. 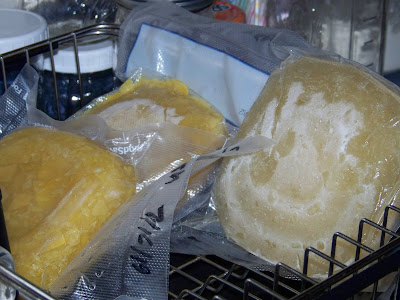 I am going to start with a recipe for squash soup. In the picture above are 3 vacuum seal bags. Two are yellow squash from my garden sliced and cooked until done then partially mashed but still with a few squash chunks. Once mashed I put them in square rubbermaid containers and freeze. Once frozen I remove them from the container and slip inside a vacuum seal bag and seal. They are then stored frozen in my freezer. They stack well this way.  I have several recipes that I have developed over the years that I use this in. One is squash soup. The other bag is a bag of frozen chicken broth and a quart of canned chicken broth could be substituted. 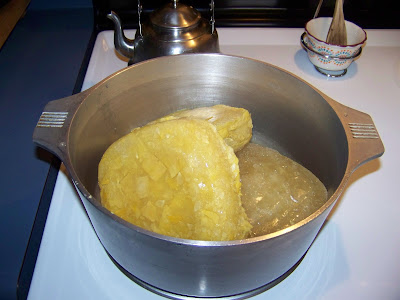 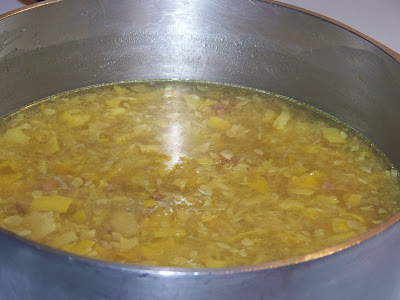 I add them to a pan on the lowest heat and slowly let them melt and simmer a bit. 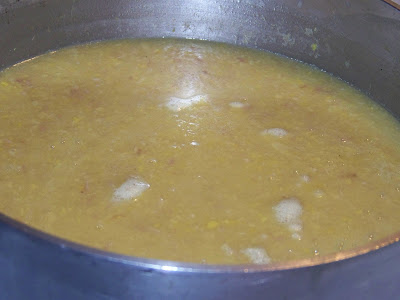 Then I run my immersion blender though it for just a swipe or two to puree it. 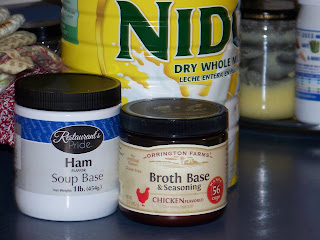 Since this is a cream soup my next additions will be dairy. Remember you do not want to boil dairy but just a soft simmer is best. I did throw in a Tablespoon of chicken base for a deeper flavor and a small cup of diced ham that I had in the door of the freezer chopped up well. 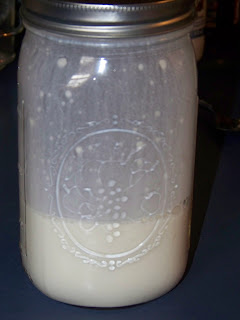 Next I added a cup of water to a quart jar and 5 Tablespoons powdered milk. To this mixture I added 4 Tablespoons All Purpose flour. Put the lid on and shake well.  I want to make the point here that if you have it half and half or whipping cream could be added instead. However I keep powdered milk, evaporated canned milk and shelf stable milk on hand almost always. I added my milk and flour slurry to the hot squash mixture and stirred while adding and continuing to simmer and stir until thickened. 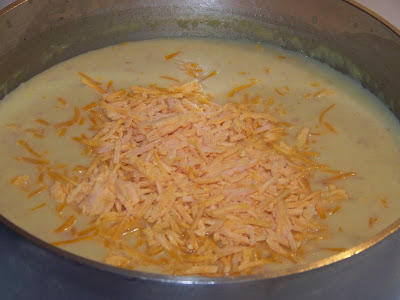 I threw in a hand full, maybe a cup, of sharp cheddar. I also threw in a small chunk of pepper jack that I found in the bottom drawer of the fridge. It gave it a nice little bite. 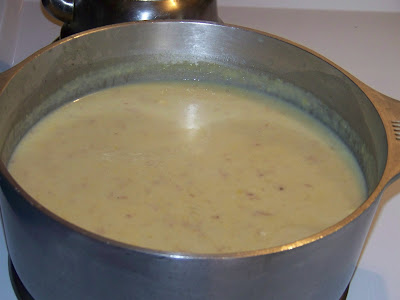 And there you go! My cream of squash soup with ham and cheese added for a little something extra. Thick and rich with a little cheesy goodness. The perfect warm and rich soup for a nice bowl on a snowy winter afternoon. We will have this for lunch and any leftovers for supper with some ham and cheese sandwiches.

I can also be found at

Posted by the canned quilter at 5:15 AM
Email ThisBlogThis!Share to TwitterShare to FacebookShare to Pinterest
Labels: Recipes, Soups and Gumboes