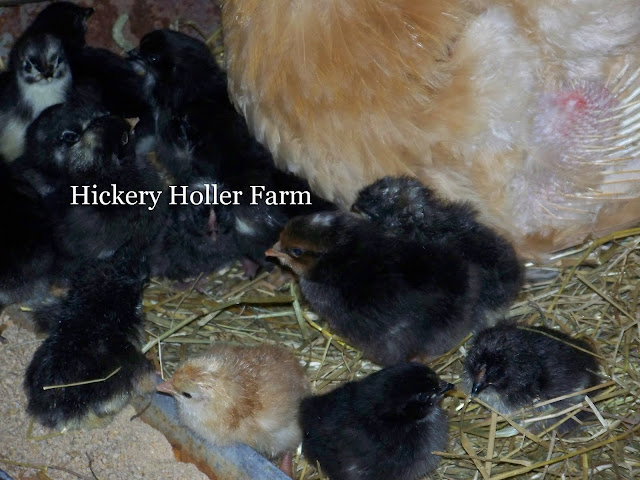 Back in the spring and early summer I had a neighbor who also has chickens come by and wanted to trade a clutch of her chicken eggs for some of my Buff Orphington eggs for her to hatch. I like the Buff Orphington breed of chicken as I think they make a great farm chicken. Large enough to be able to use them for meat, docile so that I am not being chased by flogging roosters and reliably laying large brown eggs throughout the year. And even better the willingness to hatch their own eggs. I always have at the least two hens go broody a year to ensure that my flock always has a clutch or two of chicks to replenish the flock. 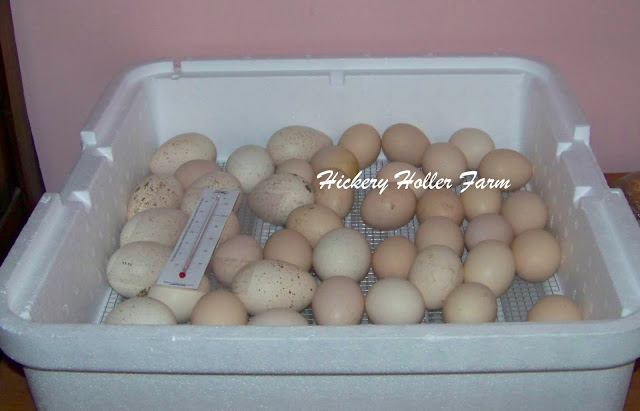 Not wanting to eat the neighbors eggs because I did not know how far they were in the hatching process I put half the fertile eggs under a broody hen and the other half in the incubator with turkey eggs that I had just set. Once the eggs hatched the chicks were all black but one and I put them all back under the old hen to raise. 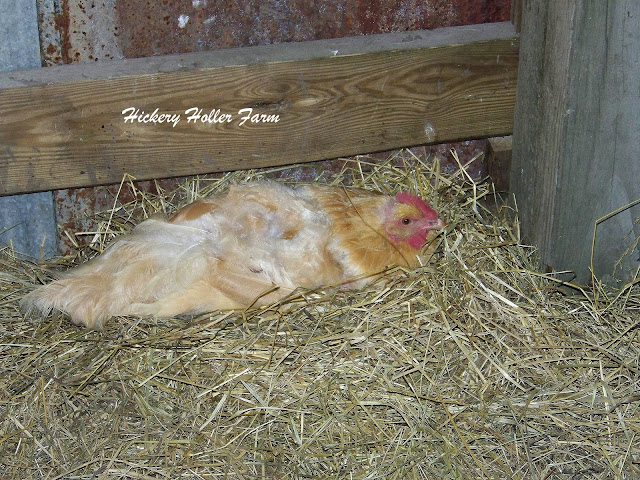 The old hen out in the shed was shut up in a partitioned off corner of the goat barn. She was snug and warm with lots of straw and a safe place to raise a brood. 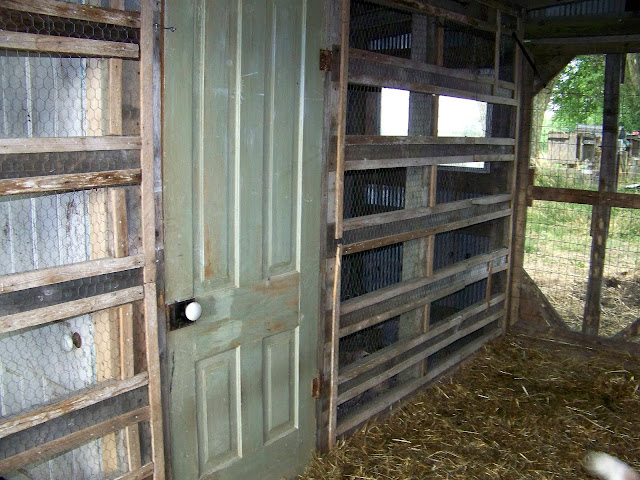 Behind a wire fence and locked door nothing could get to the chicks and they were raised there until they were old enough to turn out into the goat yard. 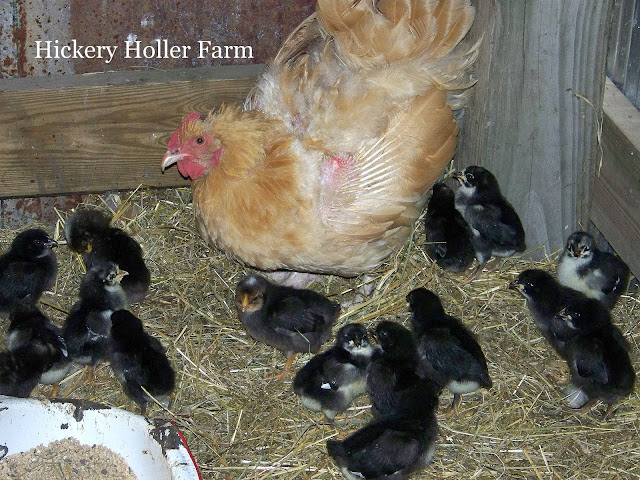 After the mother and other  chicks almost pecked the little yellow one to death she was rescued and brought into the house and became a pet we call Paula. O Wise One is convinced Paula is deaf because of the pecking to her ear area and she lives away from the black chickens. 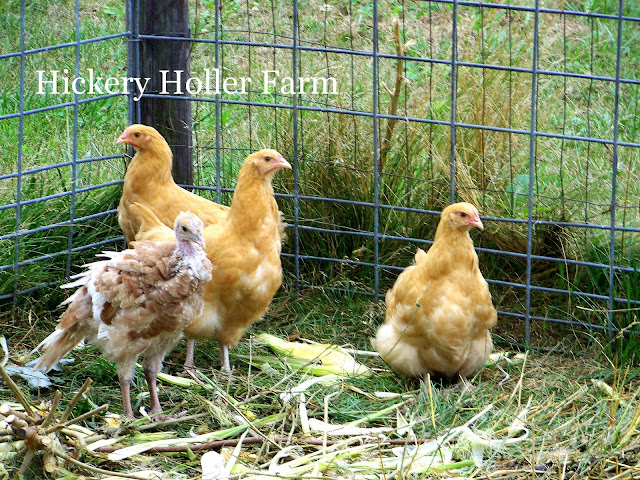 I had hatched out some young Buffs earlier in the spring and they were integrated back into the main flock and will become part of my main egg production flock. The Bourbon Red turkeys will also be butchered other than the ones that are out with the gobbler and hens and raised by the turkey hen. These young hens and gobblers already a part of the flock I will keep as my gobbler is getting up in age and this young stock will eventually replace the older gobbler and hens. They themselves are a sealed flock isolated from the turkeys that I intend to butcher.

I know many people buy meat chicks to raise and butcher. I do not! We butcher what we raise on the farm and this year it was the neighbors black chicks now half grown. Raised off some grain and a steady diet of grass and garden culls throughout the gardening year and kitchen scraps.

With cool weather arriving it was time to begin the butchering process so that we can get it over before the severe winter weather arrives. 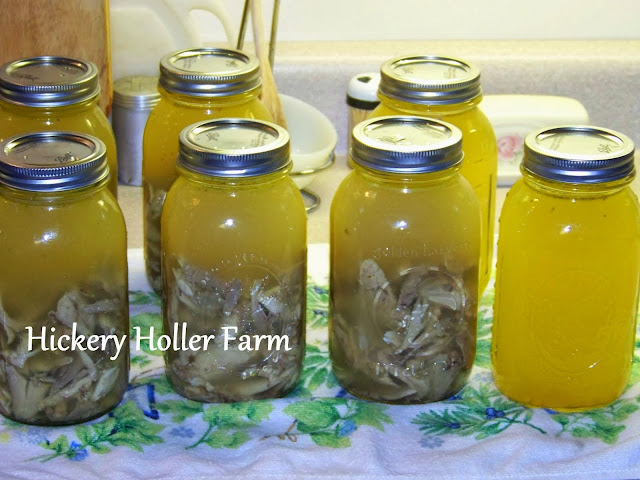 So yesterday my spring black chicks became canned chicken meat and rich bone broth for the pantry. Healthy and farm raised and used regularly for casseroles, soups, noodles and gumbos throughout the year. 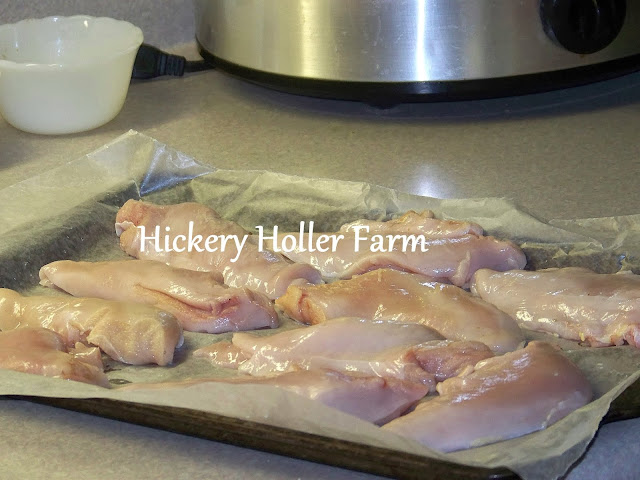 And chicken breast are freezing in the freezer. They will eventually be vacuum sealed in serving size portions. Lean white meat, farm raised and butchered.

So as the leaves continue to turn and fall off the trees and the weather cools, a soft autumn rain falls here on the holler. It has been raining off and on since yesterday and is predicted to rain again tomorrow. So as the weather worsens I will continue to cook down my butchered birds and once we finish then start butchering turkeys. With 16 chickens and 9 turkeys to be butchered we will try to do a few every day or to. Once they are processed then we butcher some more.

It may take us a week or two but slowly we will get it all done.

Posted by the canned quilter at 9:31 AM
Email ThisBlogThis!Share to TwitterShare to FacebookShare to Pinterest
Labels: Butchering and Curing Meat, Canning, The Henhouse