Another Meal From Scratch 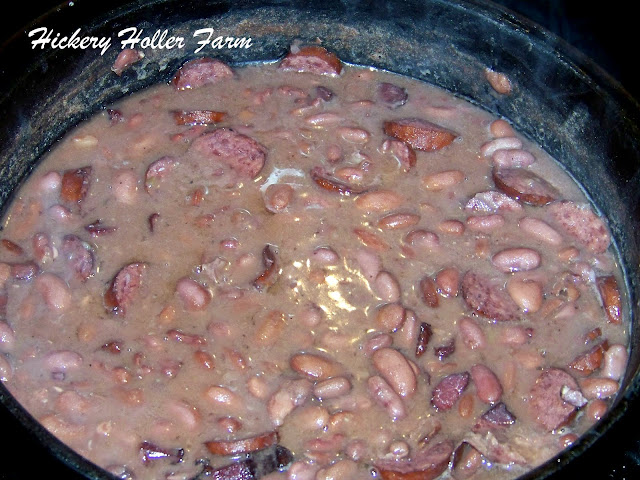 I have been doing posts lately on cooking with  home canned foods. I think that most people don't realize on a self sufficient farm how much time is simply spent on producing what you and/or your animals eat. I think the trick to be self sufficient is variety. For example beans. Everyone just about will eat green beans but eventually wouldn't you get tired of just green beans? So for me I produce and preserve Not only green beans but Red beans for serving with rice, green peas, field peas, and horticulture beans which are a white bean and makes a thick rich gravy. All of these can be frozen or canned and I have done so. A few pieces of meat to season and rice to serve with it and you have a meal. I wanted to do another posts on home cooking  with canned and dehydrated foods so I decided to make a pot of red beans , rice and some sides. 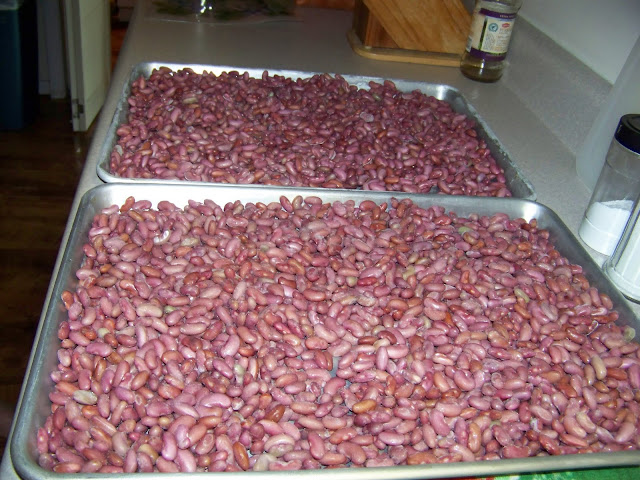 I started out with 2 bags of frozen red beans. I grow my own every year and although I prefer them frozen I have also dried them and used them that way as well. It just depends on how much freezer room I have.  I save the seeds so that I do not have to continue to repeat buying seeds and save that yearly expense. These beans cook down into a rich and creamy broth that I serve with fluffy white rice with lots of slices of smoked venison sausage, frozen onions from last years garden or you can use dehydrated onions also.  In this pot I used half a pound of sausage and half a pound of ham pieces. 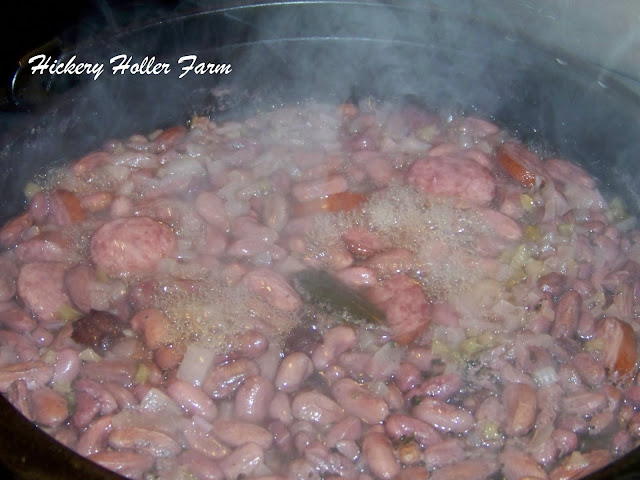 I like to add garlic powder or fresh if you prefer. I simply add water and a bay leaf and simmer on the back of the stove in a cast iron dutch oven for most of the day. You have to remember to stir occasionally and add water as it boils out. You simply cook until the beans are soft and a thick gravy is formed. Then cook a pot of rice to serve with it. I do buy rice: ) Everything else in that pot came off this farm. 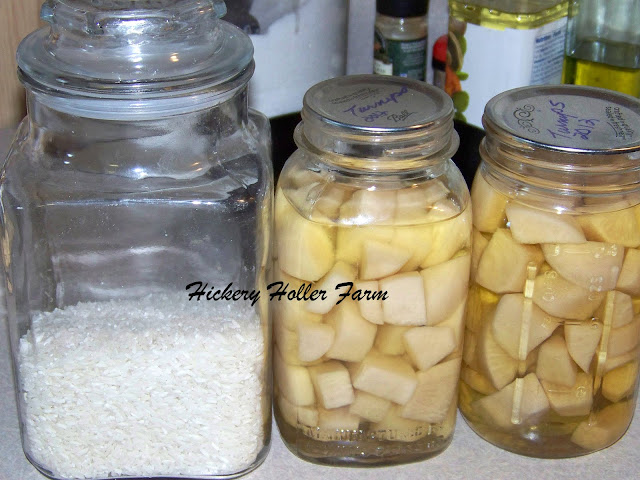 With my beans I want to make some mashed turnips. I take out 2 quarts of canned turnips out of the pantry. Drain. 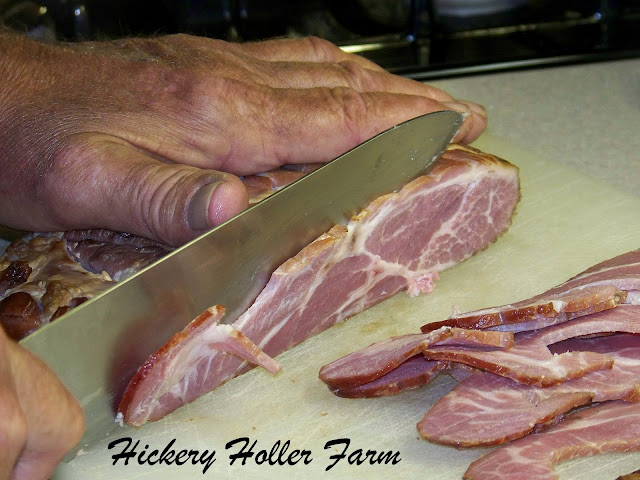 Then I take some bacon and slice small dices and put in a pot and cook until done then on top of the bacon I add about a half cup of frozen onions. 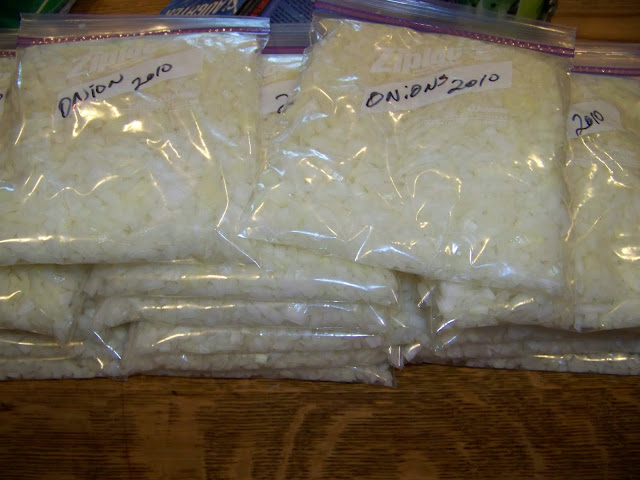 For those who have not tried it my frozen and dehydrated onions are probably the most useful seasonings in my kitchen and a huge time saver.  Once those onions are added to the bacon I just allow the onions, bacon and olive oil to cook on low until the onions start to show a little color or turn just slightly brown around the edges. The trick is to make the bags really thin so that a piece can be broken off easily. I just suck the air out with a straw so they can be resealed. One of the few things I do not put in Vacuum sealed bags. 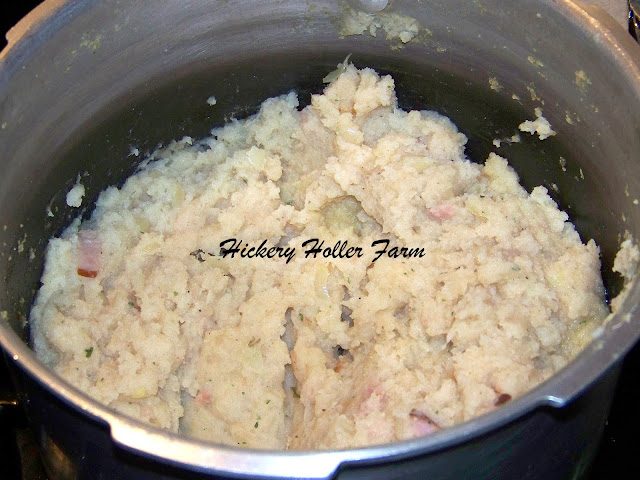 Then pour your drained turnips over the top and add about 1/4 cup or 1/2 stick butter, salt, pepper and parsley. Then mash those turnips just like potatoes. You can add a little instant potato flakes to thicken if necessary. My mother would then take them and put them in a casserole and add cheese on top and put them under the broiler for just a couple minutes to melt and bubble the cheese. My family prefer them without the cheese. I serve them warm out of the pot. Creamy mashed turnips with chunks of smoked bacon, butter, parsley, pepper and onions.  A filling side dish and another use for those canned turnips. My mother would make a mashed yellow squash just like this with canned squash. 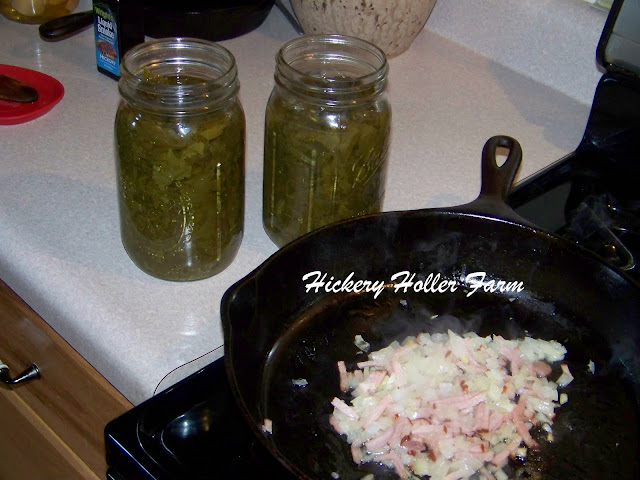 My next dish is mustard greens. This time of year when there are no greens left those canned greens sure hit the spot. Simply again saute bacon and onions browning in a skillet with a touch of olive oil  just like the turnips. Remember we are not serving any meat with this meal other than what is used to flavor the dishes with. 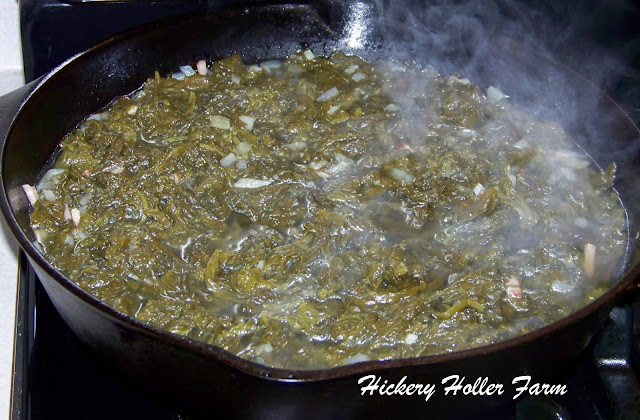 Once the onions and bacon are sauteed just dump your jars of greens water and all into the pot and allow to boil until the water is gone. I add a 1/2 teaspoon of sugar and some salt and pepper to my greens. 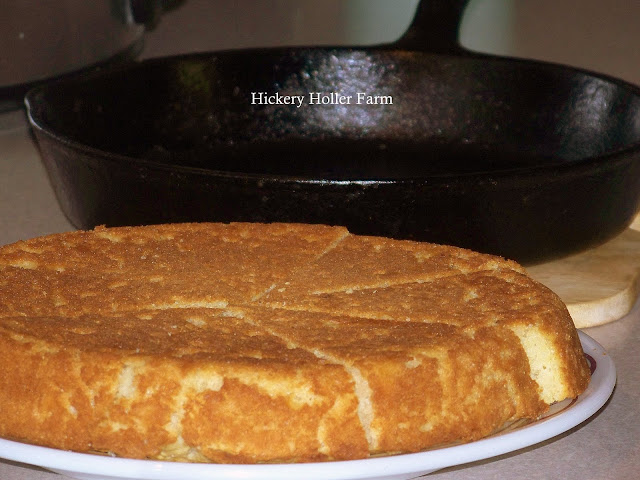 I was taught that there were three things that a woman needed to learn to cook for her family. Cornbread, biscuits and a good pie crust. I make a buttermilk cornbread in a cast iron skillet. My mother's skillet to be exact.  As a child my mother made buttermilk  cornbread much more than she made yeast breads. Yeast breads were for special occasions. Everyday meals were accompanied more often than not by buttermilk biscuits  or corn bread. Cornbread if kept properly could be eaten the next morning for breakfast in milk or for a quick lunch. Once stale could be crumbled and fed to the chickens or dogs and could be produced cheaply from corn grown right on the farm. Cornbread could be crumbled and meat and eggs added for dressing. Cornmeal and grits were staples. Flour and yeast must be bought off the farm. Need some variation for that cornbread throw in a can of creamed corn, a hand full of shredded cheese or maybe some leftover cracklings crumbled up.

You can find my cornbread tutorial HERE 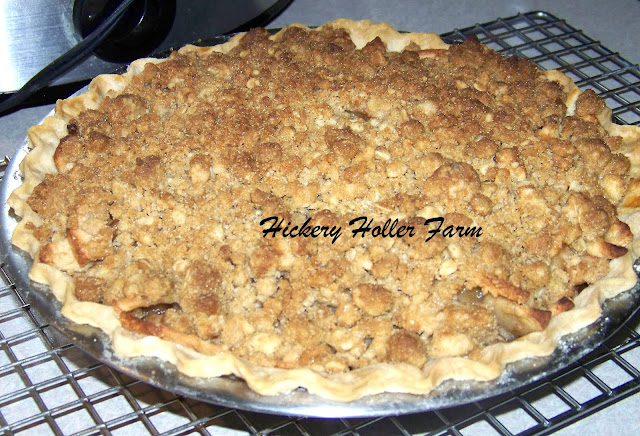 Next is desert. I don't cook desert everyday but do try to bake on the average of once a week. A pie or cake will last several days and many times the grandchildren will stop by and help finish it off or I will send some home with my daughter to share with her and her husband. Very rarely does it go to waste around this house. I buy very few chips or outside sweets so home baked treats are pretty well the norm at my house. Most are made with fruit produced and canned or frozen right here on the farm.

On this day I made my normal 2 crust pie crust. I used lard rendered and then frozen. I take out a quart of lard as I need it and leave in the refrigerator.


Mix and set aside 1/3 cup water, 1/3 cup flour and ½ tsp salt. In large bowl add 1 and 2/3 cup all purpose flour then cut in 2/3 cup of shortening (lard). Add flour paste to this mixture. You can add cold water a teaspoon at a time if needed and mix until it forms a ball. Makes 2 crusts.

Combine water and cornstarch and cook until thick as pudding. Cool slightly and beat egg whites until just foamy. Add cornstarch mixture and sugar alternately beating a small amount in at a time. Then add vanilla. Beat until very stiff. Spread on pie filling. Seal edges well. Bake at 350 for approximately 20 minutes to lightly brown meringue. 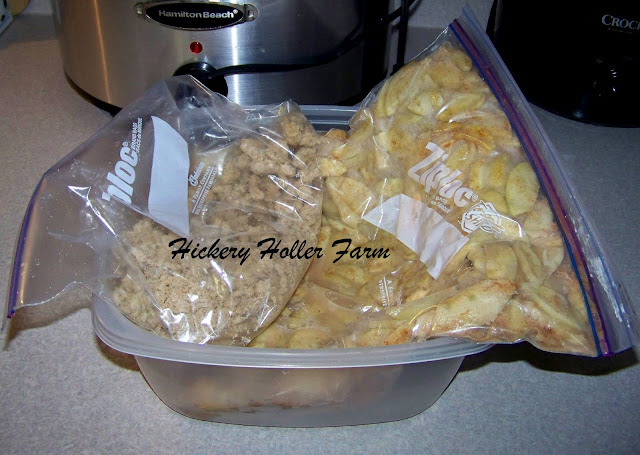 I took out a bag of my apple pie filling in a bag. Made with apples produced right here and then frozen in gallon bags. I also took out frozen streusel that I make and keep in bags in the freezer door.


Apple Pie In A Bag 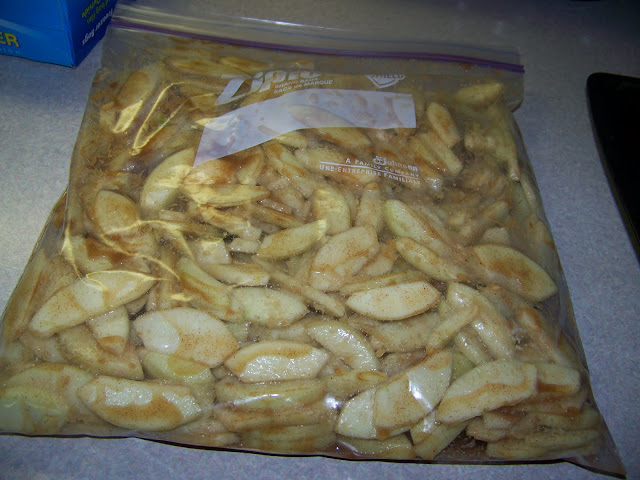 You just add the bag of defrosted pie filling to the crust, sugar, butter, flour and spices are already in there. Then I add the frozen streusel right on top of the filling and bake. 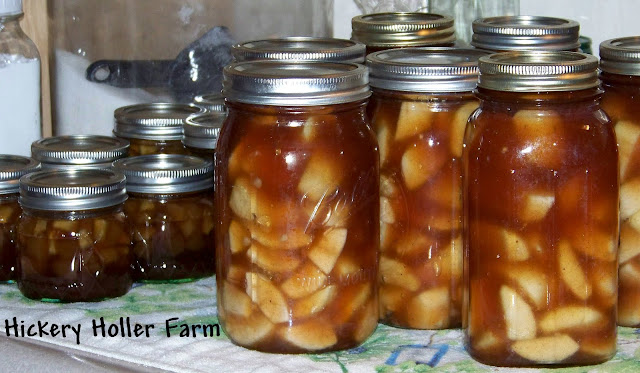 You can do the same with my canned apple filling. Just add it right to the crust and then sprinkle the streusel on top. Then bake for about an hour and 10 minutes.

Mix together and crumble over pie filling.

(I keep this in small bags in the freezer. Simply remove and sprinkle over pie filling no defrosting required. Works on muffins too) 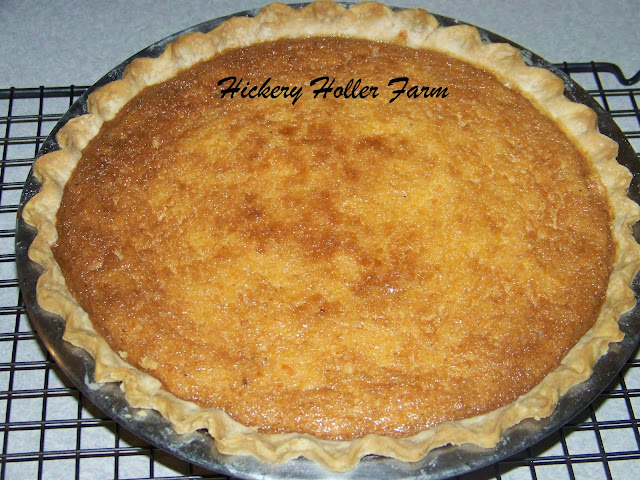 With the other crust I put a sweet potato from the pantry into the microwave and cooked until soft. Then used it to make a sweet potato pie. Baked both pies together in the oven. 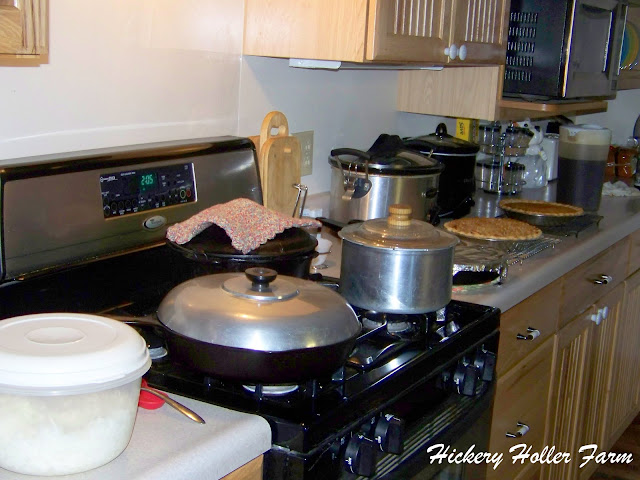 And that was a meal completely out of my pantry and freezers with the exception of the flour used and butter/dairy. Once you learn how to stock your pantry you are never without a meal at your fingertips.  With the exception of dairy I could go weeks and never even see the inside of a store. For me I grocery shop once a month buying usually milk, cheese, butter, flour/corn meal, Tea, coffee and olive oil/coconut oil. Sometimes cleaning supplies such as vinegar and baking soda. This is usually incorporated with a trip to the library, the recycle station to drop off my recycle bags and a feed store stop. O Wise One will pick up a gallon of milk about once a week in the little town about 10 minutes up the road, unless we happen to go to Amish country then he will pick up fresh milk/butter/buttermilk/cheese from there. The Amish community is about 45 minutes away. I do like to go there occasionally because they have a great fabric store with quilting supplies.

I am excited that they are opening a new Amish grocery not 15 minutes from my front door.  I hope they will carry the bulk spices and such because it is so much closer than where I get them now. I love buying rice, oats and such in large quantities.

Hope this helps someone!

How often do you shop?

What percentage of food do you produce for yourself?

The Canned Quilter
Posted by the canned quilter at 2:00 AM
Email ThisBlogThis!Share to TwitterShare to FacebookShare to Pinterest
Labels: Desserts, Frugal Tips, Meats and Main Course