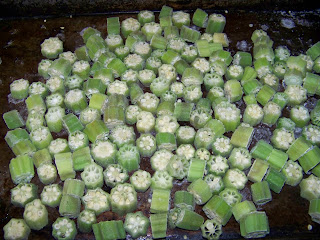 Here are some ways to reduce that slime factor of your okra:

When cooking okra if you think cutting the okra up into smaller pieces it will be less slimy, that just isn't the case. The opposite is true. The more you cut the okra, the slimier it gets. So by trimming off the caps and the very tips and not actually cutting into the capsule before cooking the whole pods, you eliminate the slime. Diligently checking to make sure it doesn't overcook will also prevent or at least reduce slime production.

One really great way to remove most of the slime is to "Rope" it. Put the okra in a black iron skillet or Dutch-oven over medium heat. Grab a spoon. Stir the okra in a circle until it starts to "rope," you'll know it when you see it. Basically you're sautéing and removing the slime from the okra. Do this for about 5 minutes.

The milk method: Soak the slices of okra in milk for about 45 minutes. When you drain the milk, you'll see that the milk has pulled most of the "slime" out of the okra. Then just shake the drained okra in a bag with cornmeal, salt, a little black pepper and a little cayenne pepper. It is now ready to fry.

Okra just naturally becomes slimy when cooked in a watery environment, such as in a stew or a steamer basket. Stir-frying or sauteing in hot oil, helps keep the slime within the okra pieces, or perhaps causes the moisture in the mucilage to evaporate, thus improving the pods' texture.

( This is the method I use most often )

Another trick to cut the slime is to wash it and dry each pod completely before you chop it. The knife and cutting board must also be dry. If slime collects on the knife, keep wiping it dry as you chop. Covering the pan while cooking also makes it ooze so that's another thing to avoid. when it is time to add it to a gumbo, or dish that has lots of liquid as the base, you do it when that dish boiling so it cooks quickly and does not have a chance to exude that slimy stuff.

Preheat oven to 425 degrees. Lightly oil the bottom of a 9 x 13 inch baking dish. In a large re-sealable plastic bag, combine the cornmeal, flour, salt, pepper and Tabasco sauce or cayenne; close and shake to combine. Add the okra pieces and shake to coat the okra in the cornmeal mixture. Arrange the okra in the baking dish in two layers. Top with the bacon pieces. Bake for 30 minutes; stir lightly to make sure all pieces come in contact with the bacon. Bake 20 minutes more, until the bacon is browned and the okra is crispy on the outside.
Posted by the canned quilter at 7:55 AM
Email ThisBlogThis!Share to TwitterShare to FacebookShare to Pinterest
Labels: Vegetable and Side Dishes