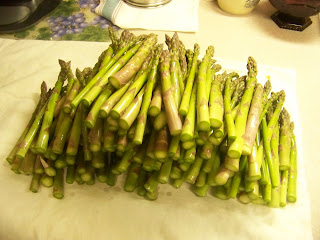 O Wise One and I picked 6 pounds of asparagus yesterday. The first major batch of the season. It was first washed and the ends trimmed off then layed on a clean dishcloth to dry.  Then put in a 13 X 9  microwave safe Pyrex dish and  clear cellophane wrap put over it. 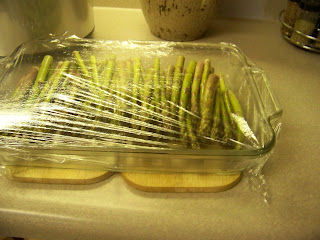 Then I microwaved it on high for 3 minutes and 30 seconds. I do this in place of blanching. I like doing it in the microwave instead of dropping it in boiling water. I think it is quicker and I don't have all that steam and heat going into the house. I have less moisture in the asparagus after it is blanched therefore less frost on the food. I can tell it is done at three and a half minutes because it becomes a darker green color. As you can see below there is practically no moisture in the bottom of the pan afterwards. 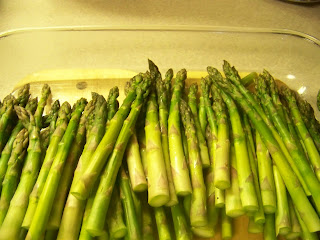 I remove the cellophane from the dishes and let it cool for a little till it can be handled without burning myself. 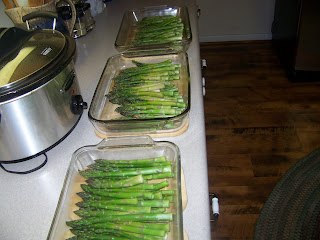 I then lay the spears out on baking sheets. They are then put in the freezer to flash freeze. As Graci says Grandma is making asparagus popsicles! 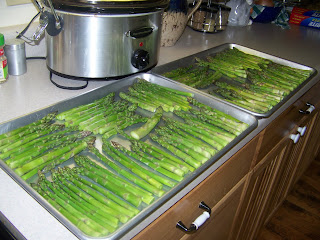 Once frozen, in this case overnight,  I put them in foodsaver bags and seal them. Those of you that have not invested in a Foodsaver I freeze almost everything in them and love them. I can take these out a year later and they taste just like I just put them in. I hardly ever lose anything to freezer burn anymore. I even repackage my meat from the grocery store in them. 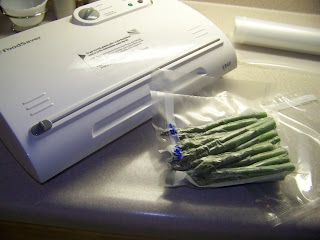 My bags are always first labeled with the year and what's in them. I try to always eat the oldest first. In this instance each bag holds a pound of fresh frozen asparagus spears. 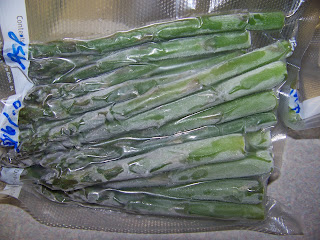 Or six pounds in total. Ready for sauteing in olive oil and a little sea salt or roasting in the oven. Asparagus for casseroles and cheese and asparagus soup. 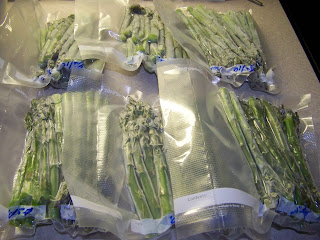 The Canned Quilter
Posted by the canned quilter at 7:33 AM
Email ThisBlogThis!Share to TwitterShare to FacebookShare to Pinterest
Labels: Freezing, Vegetable Gardening